Guitar jack repair and jack replacement can solve audio problems such as no sound coming from your amp, scratchy and static noise caused by bad connections. We also repair guitar amp output/input jacks.

Whether you call it an input jack or an output jack we can help you when your guitar's jack socket does not work, or when your amp's input jack or headphone jack adapter is acting up. We strongly recommend Pure Tone multi-contact jacks for replacing a worn-out output jack.

We fix related related problems such as a loose jack plate, stripped plate mounting screw holes, missing screws, cold solder and broken wiring connections. The cost for jack repair is usually $20-25. The cost for a replacement mono jack is usually $7-10. Our turnaround time is around 48 hours.

Yes, we also do bass guitar jack repair. The process, time and cost to repair or replace a bass output jack is the same as for an electric guitar.

Symptoms of a Bad Output Jack

Problems with no sound can be caused by a faulty guitar output jacks, a broken amp input jack, bad wiring or broken solder connections. Symptoms such as sound cutting out, scratchy sounds or static noise coming from your amp usually indicate damaged connections. Another common problem with a guitar or bass is difficulty plugging in a patch cable lead.

Is it your guitar jack or amp jack

To determine the source of your problem you should try your guitar on two amps or try two guitars on the same amp. It will be easy to determine which piece of gear has the problem. If you're having amp problems you should visit our page on guitar amp repair to learn what we can do for you.

What is a guitar input jack repair cost?

A guitar jack replacement cost is usually around $24-$40, including the price for a 1/4" mono-jack. We generally recommend Switchcraft jacks and Proline jacks. We do not use cheap import jacks. 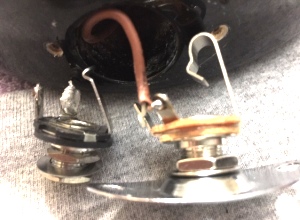 To lower manufacturing costs of import guitars guitar manufacturers often use low quality electrical components. This is certainly true when it comes to output jacks.

The adjacent photo shows a cheap import output jack which is being replaced by a standard size jack. From the connection lugs to the overall design the replacement jack is vastly superior.

Should You Repair Your Own Jack?

If you have good mechanical aptitude you can probably do it yourself. The most difficult part is being able to make a clean soldered connections. You need to make certain you have the right type of guitar jack, and know where each wire should be attached.

Also make sure you don't damage your guitar's finish with a hot soldering iron or a drip of melted solder.

About Our Jack Repair

We guarantee our wiring and solder work for one year when the jack we install has not been pulled, removed or otherwise tampered with. During our work we will cover and protect your guitar's finish from solder related damage. All jack repair work is tested before your guitar is returned to you.

For a free estimate or to schedule repair or replacement simply call us at 678-402-6739 or send us a message by clicking on the button below. 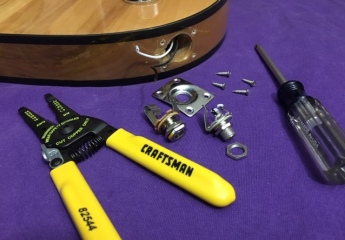